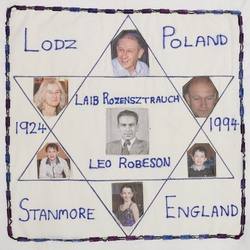 Laib Rozensztrauch was born on 27th February 1924 in Lodz, Poland, into a close knit family. He had an older brother Abraham, an older sister Sura and younger sister Raca Gita. Miraculously he survived both the ghetto and Auschwitz, where he was sent in August 1944 and liberated by Russian troops on 27th January 1945. Like many survivors, he returned to his former home, now occupied by a local family, only to have the door slammed in his face.He ended up in a displaced persons camp in Cremona, Italy. His name was seen on a list by an uncle from London who arranged for him to come to England. He worked for his uncle, changed his name to Leo Robeson and married my mother in 1956.
The square has been designed with my daughter Talia and represents his family and legacy. My father immersed himself in his work as a rag merchant and devoted himself to his family, rarely opening up and talking of his life before and during the war. It was too painful and traumatic.
My father died in 1994 and around 10 years later, my sister Suzanne began investigating whether any family records had survived in Poland. To her great surprise, she discovered Abraham, who had gone to Russia in 1939 to find a safe place for the family, had also survived the war. He returned home from a Russian labour camp in 1946 and was greeted with the same door being slammed in his face. Neither Abraham, who died in 1989, nor my father realised the other had survived, but Abraham’s three children and their families meet with our family each year. How their lives would have been different had they been reunited!