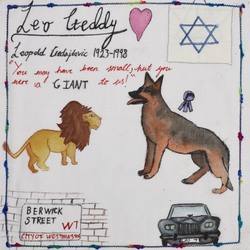 We thought about what would represent my Dad best in our square for the quilt and here are our reasons for including them.The Berwick Street sign is where he had his business for many years, but also where his cousin Paula from Ternova, former Czechoslovakia, walked in after tracing him though the Red Cross. Up until then he didn’t know that other family members had survived and was delighted that his cousin had. A German Shepherd dog, as my Mum and Dad had a love for dogs and spent many weekends at dog shows. A lion after his English name and Hebrew one too. A Rolls Royce which he loved, he didn’t really spend much on clothes or holidays but he loved his cars. It wasn’t to be flashy but I think it was more as a sign that he had made something of himself. A heart, as he had a big one and was kind and generous. A Magen David as his religion was an important part of his identity.

One of the “Boys” said to me at the Memorial Service we held for him after returning from burying him in Israel that “your Dad may have been small but he was a giant to us” and I felt that summed him up and has always stayed with me.