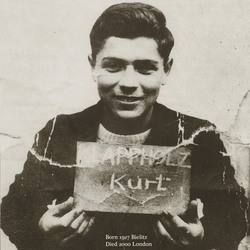 Kurt Klappholz was born in Bielsko, Poland, on 17th June 1927. The only child of Moritz and Sonia Klappholz, he had an idyllic childhood before the Germans occupied Poland.

This photograph was taken a few months after liberation. My Papa had only just recovered form a bout of typhus which had nearly finished the job the Germans had started. This picture captures the very essence of him, his innate curiosity and genuine warmth and love for humanity, despite his horrendous wartime experiences. Almost all of our family were murdered.