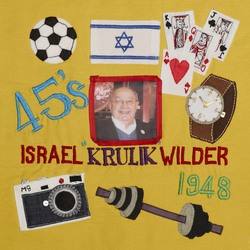 Israel (Krulik) Wilder was born on 3rd December 1928, in the small town of Piotrokow in Poland. His mother Chaja and sister Basia were murdered in the death camp of Treblinka. Israel and his father Lajb were taken to the death camp of Buchenwald which Lajb did not survive. Israel was then transported to Theresienstadt, but was liberated by Russian soldiers before the train arrived. Later that year he was taken to England, to a hostel for young refugees in the Lake District, in Windermere.

In 1948 he clandestinely travelled to Israel to fight in the War of Independence. He returned to England after the cease fire where he trained to be a watch mender. He met and married Gloria. They had three children, Simon, Martin and Paul. His business thrived. His family expanded with grandchildren, Marc, Max and Melody. He died in 2011 at the age of 82 surrounded by his family.

He was the Treasurer of the ’45 Aid Society for many years and Master of Ceremonies at most of their events. Yellow was his favourite colour – whenever he bought flowers, they were always yellow! The life and soul of every party, he loved playing cards and taking photos and had a wonderful sense of humour.