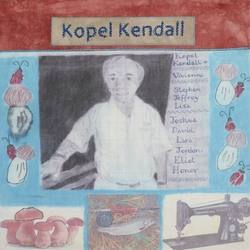 Kopel Kendall, formerly Kandelcukier, was born on the 7th March 1928 in a little town called Bialobzgi in Poland. Life was very good for him, he had lots of friends and they often went to the forest to play and pick mushrooms, which is why they are on his square. He also thought ladybirds were very lucky for Jewish people.

In 1939 everything changed when Germany invaded Poland. The town was turned into a ghetto, his father was taken away and never seen again. Kopel was only 11 years old and had to look after his mother and two sisters. He was then sent to Skarżysko-Kamienna, a forced labour camp and was told to say that he was 16 years old and a carpenter. In 1941 he was sent to Buchenwald concentration camp where he worked in an armament factory. It was whilst he was there that he met some of The Boys who ended up coming to England with him after liberation. Afterwards he was sent to Schlieben in Germany and then finally to Theresienstadt where he was liberated by the Russians on the 8th May 1945.

He arrived in England on 13th August 1945. He was taken to Windermere with some other child survivors and was given his own room with clean sheets and looked after very well. They all became a new family and even today they are still one big family. They really needed each other to talk to as they all understood each other, having lived through similar experiences.

I met Kopel in London in 1955 and got married in 1956. He had a successful life as a tailor with his own shop which is why the sewing machine is included in his square. We had 3 children and 6 grandchildren. The youngest of them drew the pictures on his quilt square. We were very happy together for 53 years. Kopel died in 2009 and I miss him all the time.