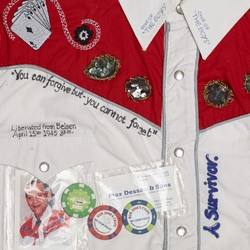 My Dad’s square is made from one of the cowboy shirts he would wear daily until he passed away, aged 76. It echoes his colourful character and his love of bling, roulette and cards.

He would rarely talk to me about the brutality and harshness he encountered but two examples he recalled were being hit in the head with a soldier’s rifle butt and losing the sight of one eye. More shockingly he also encountered kindness from a German soldier who helped him evade the gas chamber.

Dad said: “You can forgive – but you cannot forget.” He could not forget. In his last few years he kept his car even though he could no longer drive. It gave him comfort to know, if necessary, he had a means of escaping. In the late 80s we visited the ghetto where he lived in Piotrokov, Poland.

Dad told me about his ‘adventures’ going out after curfew and dodging German guards; for a bag of sugar. We visited Auschwitz and while standing in the courtyard he pointed to a brick wall and told how he saw Jews lined up and shot.

In 1945, Dad’s story moves to England, where he arrived at Windermere in a military plane with no seats. He changed his name from Kopel to Max on the suggestion from his cousin who thought there would be a better chance with the ladies with a British name. Dad took British citizenship in 1956. He started his own business in manufacturing clothing for retailers like Marks and Spencer.