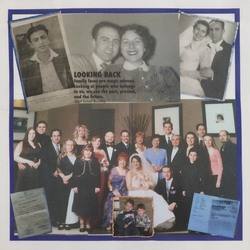 Born Jehoszua Cygelfarb in Lodz on 24 December 1926 to Avrom Kalman, a self-employed painter and decorator and Pessa, Josh had 3 sisters, Sarah, Rachel and Mindy and a brother, Wovek. In September 1939, the Germans moved into Lodz so the family went to the ghetto in Piotrkow Trybunalski.

At 15, Josh and Wovek 19, worked in the Hortensia glass factory in Piotrkow. They were separated from their family, never to be seen again. As they headed by train toward a labour camp, a worker found a piece of paper dropped by Josh’s father. He wrote that the brothers should take care each other and fight for their lives. On November 25 1944, Joshua and Wovek arrived at Czestochowa labour camp and stayed until January 17 1945. They were then taken from Buchenwald to Nordhausen. Each day, prisoners were taken to Dora Mittelbau, a large underground factory for manufacturing bombs and rockets. Josh worked in the staff kitchen where the officers ate and was able to supply extra food for his brother.

After the war, Josh ended up in Prague, looking for family. Wovek disappeared, feared dead. Josh registered at a Jewish orphanage and was brought to Alton in England where he lived in Overbury Court hostel. He was taught to work with wrought iron and then moved to Bedford, where he was an apprentice mechanic for Rolls-Royce automobiles. An uncle from Nottingham found him and gave him names of relatives in Canada and Paris. He contacted his aunt in Paris, who told him that Wovek was living there with her.Joshua made his way to Canada, arriving in Halifax on the Ascentia on 27 December 1947 with 700 war brides. He became a greeter for the Hebrew Aid Society for Holocaust survivors and brought Wovek and his wife over from Paris. Joshua married his beloved wife, Malka Rae, in 1953. Founding members of the Beth Emeth Bais Yehuda conservative synagogue in Toronto, he is still a member. They had 4 children, Keith, Lloyd, Paul and Sharon.

Joshua was owner and president of Paris Sportswear. Sadly, he lost Wovek in 1993 and Malka in 2012. Today he has nachos from his children, 9 grandchildren Beth (spouse Sean), Sean, Jaime, Jeffrey, Brian (spouse Samanatha), Samantha, Brandon, Nicole and Amanda, and 2 great grandchildren Tyler, Zachary and one on the way. Josh said, “What happened to us cannot be buried.”