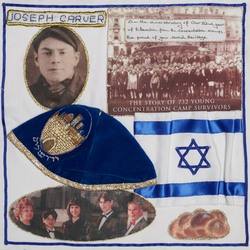 The family chose Martin Gilbert’s book cover entitled ‘The Boys Triumph Over Adversity’ because Joseph himself, aged seventeen, was one of those surviving

orphans photographed in front of the Jan Hus monument in Prague just before their departure to a new life in England in August 1945.

Although it was many years before Joseph could begin to talk to his three daughters about his experiences in the concentration camps, he gave each of them a copy with a personal inscription so that they could read and understand the experiences of fellow survivors.

Top left is a photo of Joseph taken not long after he arrived in England and still in awe of his new surroundings, language and customs.

His yamulka along with the Israeli flag signify his enduring pride and love of
Judaism and Zionism, which for him were bound together.

The bottom left photo shows Joseph and his wife with their grandchildren, the third generation, celebrating his grand-daughter’s Bat-Chayil. Joseph adored his family which was the most important thing in his life and evidence that he had succeeded where the Nazis had failed.

Finally, the picture of a Challah depicts his love of bread and he used to say that a piece of bread in the Camps was the difference between life or death.