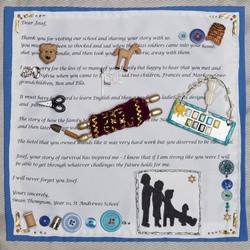 JOSEF PERL was born on 27 April 1930, in Velicky Bockov, Czechoslovakia, the only son of Frieda and Lazar Perl. He had eight sisters. His journey through the camps included Krakow-Plaszow, Auschwitz-Birkenau, Dachau, Bergen-Belsen, Grossrosen, Bolkenhain (a subcamp of Gross-Rosen), Hirschberg and Buchenwald, from where he was liberated in April 1945 by the Americans, 16 days before his 15th birthday.
The concept for Josef’s square is that of a fictitious letter, written to him by a young pupil after a visit to her school, where he told his story. He visited thousands of children at schools throughout England and received innumerable letters from them. The images on the quilt depict his life after the war and represent the fact that the Nazis could not prevent him from leading a fulfilled and happy life.

The Union flag commemorates his arrival in England, where he learnt a new language and started his new life. The cutting shears, tape measure, thimble, buttons, spool of thread and dressmaker’s dummy symbolise the trade of dress designer and pattern maker he learned as part of his rehabilitation. The wedding rings represent his marriage to Sylvia in Brighton in 1955.The spade and the family’s Sefer Torah are central to Josef’s story. Originally acquired by his great-great-grandfather, it was buried in 1938 to keep it safe from the Nazis. Unknown to Josef, his father had also survived the war. On returning home, Lazar dug it up and, after emigrating to Israel, gave the scroll to Josef who undertook its complete restoration. The jacket and silverware incorporate the names of the family who perished. It is still in continual use.

The ‘Hotel Full’ sign represents the 22-bedroom ‘Sunnyside Court Hotel’ they had in Bournemouth (hence the yellow sun). It was always with joy that they put up the ‘Hotel Full’ sign. The pearls represent our surname, Perl, and come from a dress of Josef’s grand-daughter, Ella.

The family silhouette depicts three generations: (L to R) Frances, Sylvia (always at his side), Josef, sitting down, and baby Ella, on Josef’s stiff leg, the leg being used as a see-saw. Shot by guards whilst escaping from one of the camps, a bullet lodged behind his left kneecap. After surgery in England the leg was saved but the knee joint was fused. The blue edge represents the blue on the Israeli flag and the blue stripes on a tallit, the traditional Jewish prayer shawl.