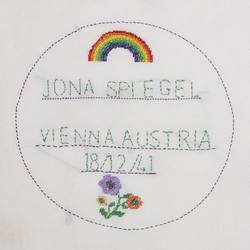 I was born in Vienna, Austria, on the 18th December 1941. My mother’s name was Elsa and at 32 years old she went and had me, not at a very good time. She had all the pain of my birth and none of the pleasure.
In the summer of 1942 she put me into an orphanage and she was then transported to her death at a camp called Maly Trostenets near Minsk. In September 1942 at just 9 months old I was discovered by the Gestapo and sent to Terezin where I stayed until liberation by the Russians in May 1945. After a little recuperation I was sent to England with about 700 other survivor children in a Sterling bomber plane. I ended up in a place called Bulldogs Bank with five other children and we were looked after by two German sisters called Sophie and Gertrude Dann. We six children were the youngest of the Boys. They looked after us 24/7 and did a fantastic job at making us feel ‘normal’. After a year I was sent to a place called Weir Courtney where some of the older children from the camps where housed.A year later I was eventually fostered by a Jewish couple, Ralph and Anne, who officially adopted me when I was 9 years old and became my parents and family. I had a normal up bringing in north London until the full past of what I had gone through was revealed to me and it has taken me over 50 years of searching to find out the full horror.
Today I have two daughters and three grandchildren which is a wonderful part of my life.