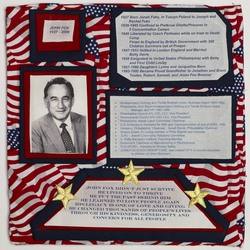 John Fox was born Jonah Fuks in Tuczyn, Poland in 1927. He was the oldest of three children born to Joseph Fuks and Rachel Gotesman Fuks. At the age of 12, he and his family were sent to the ghetto in Pietrokow. His mother and sister were sent by train to Treblinka and never seen again. John, his father and brother Harry survived by working in the glass factories in the ghetto. The three survived several concentration camps almost to the end of the war. His father, Joseph, died shortly before liberation at which time John and Harry were separated from each other. They were individually liberated and reunited at Thereisenstadt shortly after the end of war. They were airlifted to England and nursed back to health.John married Betty Davis in London in 1953 and they emigrated to America in 1956. John worked as a tailor in Philadelphia and quickly rose up in the ranks of the amalgamated clothing workers of America Union, eventually achieving status as an international Vice President. His life’s work was fighting for workers’ rights and protecting those who were discriminated against in any way, whether it be for race or religion or gender. He is survived by his wife Betty, his three daughters and five grandchildren.