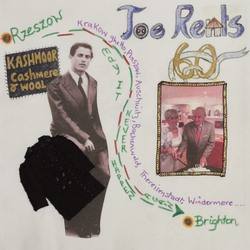 Born Jozek Ratziek in September 1929, Joe lived in Rzeszow, a town near Krakow with his family. They were all made to live in the Krakow ghetto prior to the Plaszow work camp in 1942. They were then transported to the concentration camp at Auschwitz where all his family perished.At Auschwitz, having been tattooed with the number B-4179 on his wrist, he was set to work in the camp with survival being the main objective. Joe was only about 12 or 13 years old and was aware that every day, early in the morning, the soldiers would come into their bunk sheds and select people for extermination. Joe always awoke very early and hid so that he could not be seen for selection.

Some time later, the men and boys that were fit enough were marched for several weeks to another camp at Buchenwald. From here, Joe was ordered onto one of many open truck trains, packed in like cattle, to make the long journey to another camp, braving the freezing rain and snow 24 hours a day and several weeks later, those that survived arrived at Theresienstadt in Czechoslovakia.

On leaving the train, Joe saw Stanley Faull (Salek Falinower), left for dead. As he recognised Stanley from Buchenwald, he rounded up a few others to help him. Thus began a long and special friendship. At Theresienstadt it wasn’t long before the camp was liberated, the German soldiers fled and the Russians came to their aid.

In August 1945, Joe and Stanley arrived in Windermere. Stanley went to stay with relatives while Joe lived in various hostels in London and performed at the Yiddish Theatre in Whitechapel. The photo shows Joe as a young man with another survivor, Ziggy Shipper; Joe is on the left hand side.

In 1951, Joe visited Brighton where he met Renee and married in 1954. He became a successful businessman, manufacturing ladies coats. The label Kashmoor and coat image symbolize Joe’s business success. Joe and Renee have three children: Lorraine (Ellie), Michael and Benice, and eight grandchildren. The photo shown was taken on their 60th Diamond wedding anniversary in July 2014.