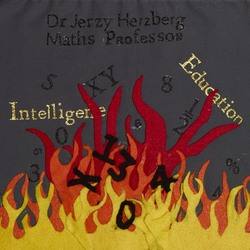 Jerzy was born in Poznań, Poland. He was incarcerated in the Lodz ghetto and then sent to Auschwitz. He came from a large family. His great uncle employed 15,000 people in the textile industry in Lodz. Three of his paternal uncles survived the war. One was living in Germany and had married a German but he fled at the outbreak of the war and eventually remarried in Israel and had children there. Another paternal uncle survived the war in France, as did an uncle on his mother’s side who was a doctor. A further uncle was a Communist and went to Moscow. He also had an aunt who was married to a German. Although she and her daughter survived the war, her German husband was killed fighting. Yet another aunt survived in Poland with false papers. Jerzy had one sister who died in the Lodz ghetto.

After Liberation, he arrived in Windermere, in the English Lake District, in 1945. He went on several summer holidays to a home run by a remarkable lady called Alice Goldberger. In 1946 Jerzy moved into a hostel in Loughton with Ben Helfgott and Harry Spiro, moving to Belsize Park in 1947.Jerzy was a brilliant mathematician: when he achieved his degree from King’s College London he was given the prize for gaining the highest first of all the graduates. He attained his MSc within three months. His PhD studies were interrupted by a sudden brain haemorrhage, from which thankfully he recovered, and by 1955 he had gained his doctorate. He became a Reader of Mathematics at Birkbeck University. However, he was not an ambitious man. He did not marry or have any family. He took early retirement, after which his participation in activities of the ‘45s declined and he passed away in February 2013.

In 2008, a Daily Mail journalist wrote an article about a manuscript he had come across of Jerzy’s wartime experiences. “He concluded his awful story with an account of his liberation in 1945, and adjustment thereafter. ‘I believed,’ he wrote, ‘that we were fortunate that there were no psychologists or social workers with us, to help sort out our problems.’ Restored to freedom, he was merely invited to get on with a new life – and so, somehow, he did.”