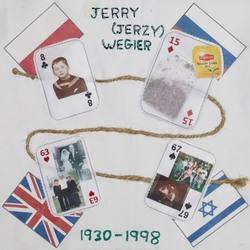 Jerry’s journey is represented by four playing cards. Follow the cord to see the order of the journey. Jerry and his parents had to leave their home in Radom, when he was 8 years old, hence the Polish flag and photo on playing card, showing No. 8.

The cord then snakes right to the Russian flag, where he survived, with his mother, until the age of 15. As there were no photos from this time, we used a Tea Bag to represent the tea bushes where he and the other children had to pick tea leaves. The cord then veers left to the British flag, where he lived from after the war until the age of 63. The photos are of his wedding to Mildred (Helen) Solomon and his three children, Suzanne, Michael and Ruth. The cord then goes to the right to the Israeli flag. His three children had previously settled in Israel and he and Mil joined them in Jerusalem, where they were blessed with eleven grand-children. The upper photo shows all of the grandchildren. We used playing cards to show his age at the various stages of the journey, as he was a champion Bridge player and Bridge was his greatest hobby. He greatly enjoyed his time in Israel but sadly passed away at the age of 67.

Regretfully, he did not live to meet his great grandson, and namesake, Eitan Yisrael. The second photo, below that of all of the grandchildren, is of his eldest grandson Eliyahu, with his wife Hodaya, who designed the square, despite coming into our lives several years after his passing, together with great grandson Eitan Yisrael.