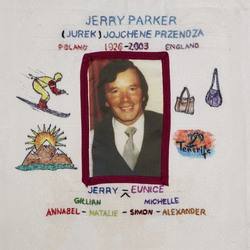 Dad’s real name was (Jurek) Jojchene Przendza and he was born in Dobczyce in 1926 to Gitel and David. He had three sisters Chava, Shifra and Golda and a brother, Natan. His father worked in a tannery and was very religious. They were a happy family.

When he came to England, he sold handbags on the markets and was successful at it. However, he did not enjoy it. He felt frustrated because his studies were interrupted by the Holocaust and he felt if he’d had the chance he would have been a professional.

Even so, he was very knowledgeable and had a very good command of the English language and spoke perfectly. He was very capable with everything he did. He was very much an individual character – always an optimist. He did not think about what had happened to him unless it was on the television as he did not want to get upset. He had a sense of humour but was also very emotional and he was a very loving father.

Jerry was about 60 in the picture on the quilt square. He windsurfed until about 70 years old in Medano, Tenerife and also in Wardle outside Manchester. He and Eunice spent four months each winter for the last 15 years of his life in their second home in Tenerife. We have many happy memories of being there together enjoying the sun. He also liked to snow ski. He went off and on with friends over 20 years and was quite an accomplished skier.

A tragedy that he died in 2003 at the age of 76. He looked so young and handsome, we thought he should have lived until 90 and he never had anything wrong with him until cancer. We all miss him very much, we adored him and we were so proud of him.

He has two grand-daughters, Annabel and Natalie, and two grandsons, Simon and Alexander.