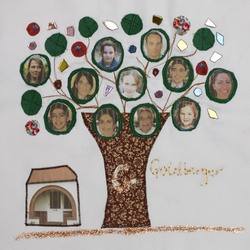 Our father Jan Goldberger was born in Bielsko Biala, Poland in 1927. He was liberated from Theresienstadt in 1945 when he came to the UK with a young group of holocaust survivors who became known as The Boys.

Our father met our mother Sara Goldberger (then Dzialowski) who is Israeli but was working in London and they married in 1968. Family has always been very important to our father, and from arriving in England as the sole surviving member of his family, he now has three grown up children and five grandchildren. All of the members of our family are on this quilt as leaves on a tree, illustrating how the family has grown and blossomed with our parents at the centre. We have also included the entrance to our parents’ family home where they have lived since 1971. This has been a hub of our family’s life for over forty years, and continues to be filled with life and laughter from the grandchildren.