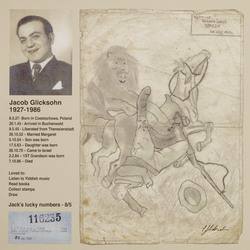 Jacob Glicksohn (Glikson) was born in Czestochowa, Poland, on May 8th 1927. He used to say that because of the war, he became a man before and without having a Bar Mitzvah. During the years in the ghetto he managed to escape from selections to the death camp Treblinka three times. He was sent to Buchenwald and from there for the final solution to Theresienstadt where luckily he was liberated with the rest of ‘The Boys’.

The square has a drawing that Jacob drew during his recovery from typhus in Terezin. It resembles the desire to be strong and healthy like a lion, which can overcome the Nazi soldiers from his past. It also shows his personal number from Buchenwald, where he was told that his life was just a number, and his lucky numbers, eight and five, as his original birthday (8/5/27) and the day he was re-born (8/5/45).

In 1970, Jacob and his family left England and went to live in Israel. Jacob and his wife Margaret had two children, five grandchildren and three great-grandchildren. He lived to enjoy only his first grandson. Jacob passed away at the age of 59 and is buried in Israel.