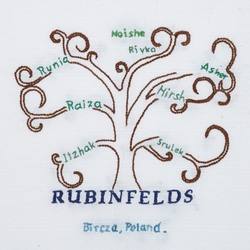 My husband Jack was born on December 3, 1928 in Bircza, Poland. In Spring 1942 he was taken to a work camp in Przemyśl, Poland. From there he went through Rzeszów, Oranienburg and Herman Goering Werke and several transition camps until he was finally liberated on 2nd May, 1945.

He was brought to England near the end of 1945 and stayed in Winchester for a few months. Then, Jack went to Northampton. In the summer of 1947, he went to London where he lived with about three different families. Jack finally moved to the US in 1949 and eventually became a builder.

Jack’s granddaughter, Orly Rubinfeld, helped design the square. The square represents Jack’s family tree. I have chosen Bircza as the roots of the tree where Jack was born and where his family lived. To pay tribute to and to remember Jack’s immediate family, his parents’ names appear at the top of the tree, and each sibling appears in a tree’s branch.