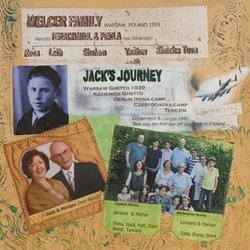 I was born in 1930 in Warsaw. I had a sister and 3 brothers. I lived in the ghetto until mid 1941. I managed to escape together with my mother to Kozienice. I had to go to farms and beg for food. A Volksdeutche farmer’s wife offered me a job which I accepted on condition that my mother will also get some food.

When the Germans liquidated the Kozienice ghetto, I missed the train. I had to walk to Deblin ghetto where I found cousins to stay with. A few weeks later, the Deblin ghetto was liquidated and we were sent to a working camp just outside Deblin where we worked until the Russian offensive.

We were then moved to Czestochowa. I was lucky to be in the second transport as the children in the first group were gassed. When we heard what had happened, we managed to convince the Germans that we were able to work as adults. We manufactured bullets in 12 hour shifts.

Again the Russian army approached, half the camp was moved and ended up in Auschwitz. Luck was on my side, I was in the second group and we were liberated by the Russians at the end of 1944.

In 1945 I came to Terezin and joined a group going to Windermere where we slowly returned to normal life. I went to a school in London with the help of Sir Leonard Montefiore. I trained as a dental mechanic but then moved on to plastic profiles manufacturing.

In 1965 I married Miriam. We have 2 sons: Jerome, an actuary, is married and has five sons and one daughter. Leonard, an IT Consultant, is married with 3 daughters and lives in Melbourne Australia. I am retired now and enjoy being with my family.

Ethan Rife, a 13 year old from Virginia, chose to remember my little brother Simcha Tova at his Bar Mitzvah and keep his memory alive. We were included in the family celebrations. Ethan became A Guardian of Jewish Memory through the organisation Remember Us.

I chose to list the members of my family who perished in the Shoah as a memorial to them. Below is a photo of my family now, who will PG continue to grow and show that the Nazis did not achieve their aim.