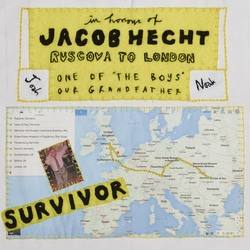 Jack (Jacob) Hecht (b. May 14, 1929) has a strong life force and gusto even now in his mid 80s. His grandsons Josh and Noah Hecht wanted to make the quilt patch a tribute to his geographical journey as he crossed Europe in severe hardship—to show the many miles he travelled from his home in Ruscova, Romania, and the stops he made through several camps as the Nazis neared the end of the war. Yellow felt has been used to recall the yellow badges that Jews were made to wear to identify them, but this time it is a badge of pride. Survivor! On the quilt patch, Jack is shown doing his trademark exuberant dancing as he celebrates freedom.

Jack’s early life was on a large family farm in the Carpathian Mountains where he was the 7th of 8 children in a religious family until the Hungarian Army first stopped them from attending school and then forced the family to abandon their property. He was held at the Viseu de Sus ghetto, a gateway for Auschwitz-Birkenau, where he was then encamped with 3 brothers who worked the stone quarries and trains (they called themselves ‘The Brake Boys’) and moved westward to other work camps by the Nazi’s quest to build roads. Jack was liberated (with one younger brother, Martin) from the Death March in 1945 and walked to Munich, where he was rehabilitated at Kloster Indersdorf. He was transported by air to Southampton in the UK with The Boys. He lived for a time in Salford, then made his way to London, where he met his wife Maureen and had a daughter (Nina) and a son (Sam), both named after perished family members.

Jack is a proud member of The Boys and his social life has always been filled with his long-standing friendships with many of his fellow survivors.