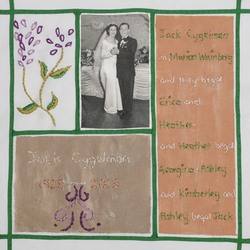 My father, Jack Cygelman was born on July 25th 1928 near Rhadom in Poland. In 1939 he was taken with his parents and 4 brothers and sister to the ghetto. His parents and one

brother were brutally killed by the Germans and he and his surviving brothers and sister were all transported to Auschwitz. Sadly he was the only member of his family to survive Auschwitz. He was then transferred to Dachau. He was liberated by American soldiers whilst being taken to his death by cattle truck.

He was brought to England by the UNRA and started a new life in Manchester, firstly as a butcher and then he started his own successful retail menswear business. He met and married my beautiful mother in 1952 and loved her and his two daughters and was the most wonderful husband father and lastly grandfather to his three granddaughters. He lived for his grandchildren. He retired at 62 due to ill health.

The square represents our family tree as it begins with my wonderful mother and father’s marriage in 1952 and continues until the present day, starting with Jack Cygelman and now his wonderful great grandson named Jack after him. Unfortunately my daddy didn’t live to see his first great grandchild born. But Jack will grow up knowing all about the truly gorgeous brave and sweet man he is named after. I have no doubt that our little Jack will be as loved by everyone who knows him as was his great grandfather.