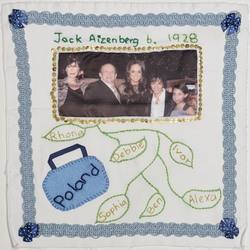 Our father, grandfather and our hero, Jack Yankel Aizenberg, was born on 15th April 1928, in a small town called Staszow in Poland.

At the age of 16 years old, he was separated from his family whom he never saw again and was taken to a slave labour camp called Kielce, 50 miles away from his hometown. After a few months he was transported to Buchenwald concentration camp in Germany, where he was made to work whilst being tortured with starvation, tiredness and loneliness as his family were unknown to his location. Jack’s childhood was ruined by the Nazis where he had no freedom or say in society. During the time spent at Buchenwald, orders came from the SS that workers were needed at Colditz castle, an ammunition factory. My father worked at the factory for a short time and was later moved to Theresienstadt in Czechoslavakia, where he was finally liberated in 1945.

He was brought to Windermere in the Lake District, for treatment and recuperation. He started a new life and created a successful luggage business with two other Holocaust survivors in Manchester.

The square represents my father’s family, especially his grandchildren, whom he loves most in the world and feels a very close bond with. We have chosen this picture to represent his replacement family, that were so tragically taken away from him in the horrors of the Holocaust and to emphasise the special person he is. Jack’s hard work and determination is revenge on Hitler and his annihilation of the Jewish people.