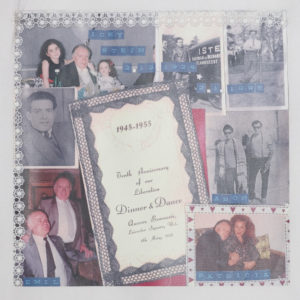 Icky was born on 2 December 1924 in Bedzin, Poland. He was sent to Auschwitz, Monowitz, Buchenwald and Theresienstadt. He was liberated in May 1945 and went to Prague. From there he was brought to England in late 1945, first to Windermere and eventually moving to London where he made a new life. He became an electrical contractor, married Patricia Abrahams and together they had two children, Aron and Avril. I chose these photographs as they portray a brief history of the time my late father spent in the UK from the mid 1940s to the time of his death in 1995. Some show him as a young man. In one photograph he is admiring his first commercial vehicle and in another he is with his son Aron, at the Wailing Wall in 1968 at his Barmitzvah. He is also pictured with his adored granddaughters Natalie and Zoe and with my late mother Pat.