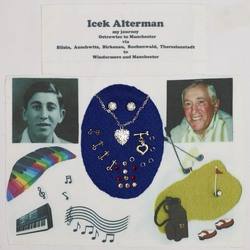 Icek was born in Ozarow, Poland, in 1928, the middle of three children. When he was a small boy, the family moved to his fathers’ home town of Ostrowiec, which was 25km away.

When war broke out, he lived with his family in the Ostrowiec ghetto. At a round up, he and his father were sent to work at the brickworks in Ostrowiec, his mother, sister and brother were sent to Treblinka. A short time after Icek was transported to Blizin, a sub camp of Majdanek. From Blizin he was transported to Auschwitz/Birkenau in July 1944, where he stayed until going on the Death March and ending up in Buchenwald. From there he was transported to Theresienstadt. He was still on the wagons when the Russian army liberated them before going on to liberate Prague. He was the only member of his immediate family to survive the war.

Icek was one of The Boys transported to Windermere in August 1945 for recuperation and rehabilitation. From there he went to Manchester, where he is still living. Icek was married to Myra for many years and they have two daughters and two grandchildren. Myra died in 1991. Icek was fortunate enough to meet a wonderful partner, Diane Stoller, and they have been together for 17 years. Myras’ sister Anita married Chaim Shane, also one of The Boys.

As a child Icek watched his uncles working at their jewellers’ benches and this inspired him to become a successful working jeweller and diamond mounter, establishing his own business in 1953. Icek plays golf regularly and ten years ago he started to learn to play the musical keyboard.