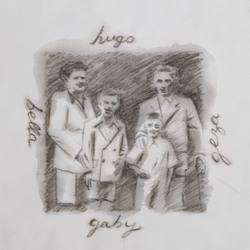 This image was from a photograph of Hugo, our father, as a boy, with his younger brother Gaby, mother Bella and father Geza. This image conveys a sense of the wonderful life the Grun family had before the world they knew was shattered. It is a place that we would like to have known – and should have known – had the war never happened. Our uncle Gaby was killed as soon as he entered Auschwitz, whilst Hugo and Geza survived several camps, only for Geza to die soon after liberation due to typhus and starvation. Bella managed to escape from a work party at a smaller labour camp and died from breast cancer in 1964. The Gruns were leading lights in their community in Berehovo in Czechoslovakia (then becoming part of Hungary and now part of the Ukraine), owning a profitable timber business, vineyards and interests in the famous Moser glass factory. Our father, Hugo, became a leading reform rabbi and was much loved as a broadcaster on national radio.

We second generation siblings Gaby Massey, Naomi Gryn, Rachelle Brettler and David Gryn and our third generation children – Adam and Clio Massey, Sadie Gryn, Joe and Zac Brettler, Isaac and Jacob Gryn – will always think of this corner of the world and this family as an intrinsic part of the fabric of our lives and chemistry, and something that still feels as if it’s missing from our present.