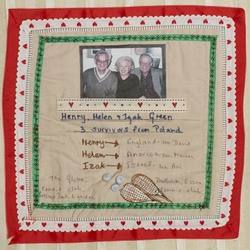 Henry was born in Strzemiesszyce, Poland, on 15th July 1928. After surviving the camps, he came to Windermere, England, in 1945. He later worked as a teacher and married Angela and had one son, David.

A much loved husband and father, he was never happier than when skiing or playing tennis. As a result he was one of the founding members of two tennis clubs, keenly believing that sport was a great meeting ground for people from differing backgrounds and beliefs. Firstly the Globe tennis club in Belsize Park, North London which became a second home for many people living nearby and then after moving to Dedham on the Essex Suffolk border he again founded a tennis club here, this time aiming at local families and again still very much a well used community amenity… hence the tennis clubs and balls on the quilt square as well as details of his small family. When younger his energy was palpable.