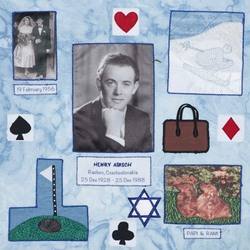 My husband, Henry Abisch, was born on 25th December 1928 in Rachov, Carpathia, Czechoslovakia. He was taken with his parents, three brothers and sister to Auschwitz Birkenau in

1943 – his parents and 2 little brothers were gassed on arrival at Birkenau. His sister was separated and went with the women to work in Auschwitz.

Henry’s older brother Moshe went to work at Furstengruber (coal mines) and Dora and then back to Auschwitz. They were on the death march in January 1945 to Bergen-Belsen. Moshe died before reaching Belsen.

Henry was liberated in Belsen by the British army in April 1945. He came to England with the ‘Boys’ in 1946 and was lodging in the Jewish Shelter in the East End. He became a typewriter mechanic and changed direction by becoming a representative in the handbag and toy trade, eventually in 1958 starting his own business in handbags with a warehouse in Camden Town.

We married in January 1956 in Upper Berkeley Street Synagogue. Henry died suddenly on 25th December 1988, the day of his 60th birthday.

The square shows Henry photographed, in the centre, at the age of 27. Top left is our wedding picture. Top right, skiing, Henry was an excellent skier. Bottom right is a photo of our beloved dogs. Bottom left, golf, Henry loved playing golf. The hearts, diamonds, clubs and spades represent the game of Bridge which Henry played for many years. The Star of David represents Israel which we both love and where my mother and her sister lived and died.