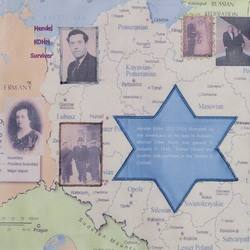 My father Hendel (Henry) Kohn was born in Geledg, near to Bwedzin, Poland, on 1st December 1921. He was taken to Markstadt concentration camp in 1942. His brother died during this time from starvation and his father died in 1941 in the Celadz ghetto. His mother, Leiba Herzberg (Kohn) died in Auschwitz.
My father was in various camps, Rosen-Buchenwald, Bissingen, Dachau, until liberated in May 1945 by the Americans on his way to Auschwitz. He then lived in various DP camps until being accepted by a relative in Paris where he lived for a couple of years before moving to London in 1946. He first lived in Golders Green with an uncle’s family and then moved alone to Stamford Hill.He met and married his wife in 1951. He was initially an electrician then asked his brother-in-law to open a launderette with him. The first shop opened in 1954 and they went on to open several more until his retirement in his early 60s. My father was a wonderful family man and a true Zionist. He loved to go to Israel and in his latter years purchased an apartment in Netanya where my parents went a few times a year until my mother got sick. Unfortunately shortly before her death, my father was diagnosed with dementia which worsened over the next 10 years until his death on 10th May 2014.

The square represents his place of birth with photos of his father, mother and brother. It gives the dates of their births and deaths and just a short outline of the camps. It shows his latter years with his wife.