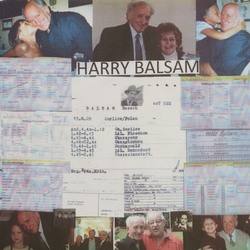 Harry was born in 1929 in Gorlice, Poland. He was separated from his mother, sister and little brother

the age of 12 as they boarded a train to Belsen and was held back, ‘selected’ to fill in the mass graves in Gorlice.

His mother, sister Gitel and brother Joseph were murdered in Bergen Belsen whilst his brother Sanie was shot through the head by an SS Officer whilst he and Harry were searching for food for the family outside the ghetto in Gorlice.

These pictures are original copies of the registration documents issued by the German authorities showing which camps he was in, the dates, his religion, where he was from and his prisoner number for all of the concentration camps he was sent to before being liberated from Theresienstadt in May of 1945. There’s also a picture with his father Moses and brother Danek taken in 1947 at a DP camp in Germany where he was reunited with them when they returned from Russia, where they had been during the war. He is also pictured with my mother, Pauline, grandchildren Jack & Emily and his ‘brothers,’ The Boys, Ziggy Shipper, Harry Spiro and Krulik Wilder.