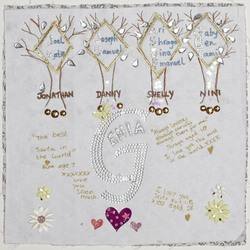 Our mother was born on 23 January 1934 in Radom, Poland. She was smuggled out of the Radom ghetto in July 1942 and taken into hiding. First in the countryside and then moved back to Warsaw where she remained hidden till March 1945. She was brought to Israel October of that year where she stayed on Kibbutz Gan Shmuel till 1948. She then served in the army and latterly studied at the old Hebrew university. In 1956 she came to London to study. She married David Schwarzmann in 1960 and remained in London. She has 4 children and 11 grandchildren.

The square represents the miracle of her survival particularly through her grandchildren who bring her so much happiness, nachos and pride.