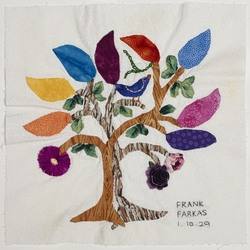 Ephraim Farkas was born in Czechoslovakia in a small village called Horincova on 1st October 1929. His family consisted of his parents, Eliahu and Chana and three other children, Faiga, Aaron, and Josko.

In 1943 they were all taken to work, building new roads until Frank and his father were taken to Theresienstadt and after that to Auschwitz where they met the rest of his brothers who had fled to join the underground. He lost his parents and 2 siblings during that time and when he was finally liberated he chose to come to England under British auspices with The Boys. He was eventually taught the language and a trade. He married Carol and together they built a wonderful family with two children, Helen and Alan and had a lovely life together, until unfortunately passing away at an early age in 1986.

Our patchwork tree is a very simple representation of the birth and growth of our families. The tree trunk represents the growth of each of our parents intertwined.
The leaves represent each member of our family: me and my three children Shai, Ben and Emily and my brother Alan and his three children, Katya, Violet and Jack.

It is simple and colourful and I think it’s a good representation of our lives.