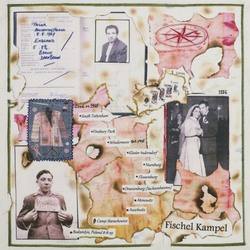 My father was born on 8th August 1929 in Bodzentin, Poland. In 1942, he and his parents were taken to Starachowice Concentration Camp where his parents were killed. My father survived and was taken to several other camps: first Auschwitz and then its subcamp Monowitz in 1943, then Oranienburg, a subcamp of Sachsenhausen, in 1944, and finally to Flossenbürg in 1945. In April 1945, the US Army liberated my father when he was on a death march from Flossenbürg to Dachau. He was taken to Neunburg, where he stayed for a time with American soldiers. He was then taken eventually to Kloster Indersdorf, a converted convent that became a children’s centre, where his photograph was taken. He arrived in the UK on October 31, 1945. He went to Windermere in the Lake District, where he stayed in a hostel for a while, learnt English and prepared to start a new life. He then, like a lot of The Boys with whom he came to the UK, ended up in London. There he became a tailor and worked with another survivor until his health no longer allowed him to do so. Fischel lived in a hostel in Finsbury Park, an area of North London, and met Sylvia, my mother in 1954. They married in 1956 and lived in South Tottenham until his early death in 1965.

The square represents his route to the UK and I have chosen to highlight his work as a tailor and playing cards, as he enjoyed both.