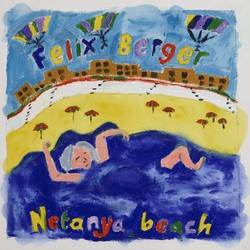 My father Yechiel Ophriam Fishel Berger (known later as Felix) was born on 10th October 1927 in Wloszczowa, a small town near Lodz in Poland.

He was deported from the Lodz ghetto in 1944 during the final stages of the liquidation of the ghetto with his mother Chaja Sarah Urbach and his Aunt Karola, Chaja’s younger sister. All remained together during the transportation but were separated on arrival at Auschwitz.

Felix was taken on to Flossenbürg and then to Dresden on the death marches. Finally he ended up in Theresienstadt where he contracted typhus and was saved by the Russian liberation of the camp – Russian doctors treating him after he had slipped into a coma.start, later studying at Glasgow University Veterinary Sciences. He worked as a country Vet in various parts of the South of England, finally running two successful small animal practices in West London.

The square represents Felix swimming in the warm Mediterranean sea at Netanya beach where he had a flat. I have chosen this image because Felix would get up early in the morning, before the heat of the day, and swim on his back. He loved Israel, spoke fluent Hebrew, and spent many holidays – with his wife Lorna and children Simon, Jeremy, Daniel and Saul there – catching up with his Israeli cousins.