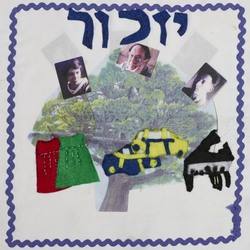 I was born on 23 June 1936 in London. My parents and my brothers were born in Germany and when the Nazis came to power in 1936, my father was offered a job in Holland and my mother decided to come to London to an aunt and uncle and whilst she was there I was born!

In September of that same year, we went back to Holland and lived very happily in Heemsteede. Holland was invaded in May 1940. My family was rounded up in Amsterdam in June 1943 and sent to Westerbork, but we were exempt from deportation to Auschwitz or Sorbibor because of my British birth certificate. In Westerbork, my family were classified as ‘Exchange Jews’, people the Nazis wanted to exchange against Germans held by the Allies. After seven months in Westerbork, in February 1944, all five of us were deported to Bergen-Belsen in Germany. We had certain privileges in the Exchange Camp in Belsen. We were allowed to wear our civilian clothes with the yellow star and our camp became known as the Star Camp. We did not have to wear the usual black-and-white striped pyjama outfits. We did not have our hair shaved off. We were allowed to keep our luggage, a suitcase full of clothes and books and games. In January 1945 my mother fell ill and died shortly afterwards, she was only 43. In March my father succumbed to typhus – he had survived two years in the camps and died one month before liberation. My grandparents died in Sobibor.

I came to England and stayed in Lingfield House children’s home with other child survivors – I was just 14 years old. Eventually, I started work in my uncle’s gloves business and moved into my own flat in Highgate. I have always enjoyed a close relationship with the expanding Oppenheimer family and I have kept in touch with Lingfield colleagues and other child survivors.

My square shows a photo of my father, Hans Oppenheimer, he loved playing the piano and my mother, Rita, she made all my clothes and knitted all our winter clothes too, and my brother Paul who worked as an engineer in the motor industry and who received an MBE in 1990. The Memory Quilt is a lovely way to remember people and bring history to life.