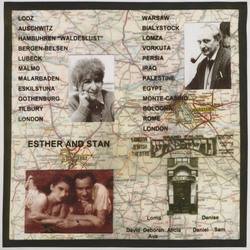 The starting point for me was the map of Poland, the country of birth for both my parents. A portion of that map serves as the backdrop of my

square featuring Warsaw and Lodz – the hometowns of my father and mother.

The Nazis forced my parents out of their homes onto journeys of horror with no knowledge of where they would end and the losses they have to face along the way. For both of them each of the stopping points could have been the final one, but miraculously, against the odds, they survived, and their journey’s end was the East End of London.

My square lists the stopping points of each of their journeys and features a photo of the Grand Palais Yiddish Theatre, where they first met.My father was the Scenic Designer and my mother, an actress, and they worked on several plays together. It was a very romantic story, and I have included a photo of them soon after they met, very much in love, in their early courting days.

They always marvelled at the miracle of finding each other and, from near death, arriving with absolutely nothing, managing to make a life and future together – listed are the names of their two daughters, myself and my sister, and their five grandchildren and my mother’s first great grandchild, Ava, born August 2014.