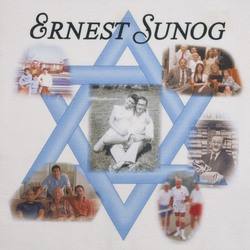 Ernest Sunog was born in Munkacs on August 15, 1928. He was taken to the concentration camp at Auschwitz probably in 1944. Prior to liberation, he was fortunate to survive one of the death marches. He was liberated by the American army and then narrowly escaped being trapped in Eastern Europe by the Russians. Of his immediate family, his sister also survived, but his parents and older brother did not.He arrived in the UK sometime in 1945, where he became one of The Boys and was fortunate and thrilled to be reunited with two childhood friends from Munkacs, David Herman and Alex “Sanyi” Abramovic. He talked often of playing football with the boys and, believing that the level of football in Australia was not very competitive, he contemplated moving there to play professionally. Instead, he moved to New York City and was introduced to my Mother, Olga (also a survivor), by Gabe Kallos, who is Olga’s first cousin and is also one of the boys.

He lived with his wife and three sons in Queens, New York, until he retired, after which he divided his time between New Jersey and Florida. He passed away on March 10, 2008 and is survived by his wife, his children and their wives, and two grandchildren. His quilt square depicts his professional life, most of which was spent as the proprietor of several children’s shoe stores; the joy he had playing tennis; his love for the State of Israel; and his only true passion, his family.