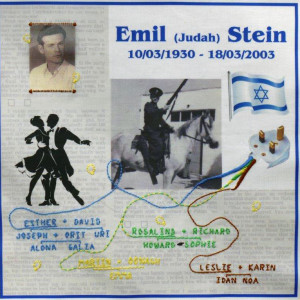 Our square represents the life & family of our father, Emil (Judah) Stein (nee Shtajnbrecher), who was born on 10th March, 1930 in Bedzin, Poland. After the Shoah, he was brought to Windermere, England with “The Boys” in 1945. In 1947 he travelled through Europe to join the Machal and fight for the State of Israel. On leaving the Army, he joined the Israeli Police Force (main photo). Later, on his return to England, he joined his older brother Icky (Yitzchak) Stein, also a survivor, and they worked together in London as electricians.Emil leaves his legacy of four children as you can see – Esther was born in 1953 and the youngest, Leslie, was born in 1976.
Emil loved to read, hence the newspaper print background – a reproduction of an actual article published about him in a local newspaper. And he loved music and dancing – cutting a fine figure on the dance floor whenever he could.