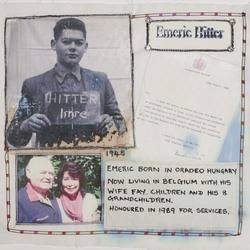 I was born in 1927 on March 13th in a place called Oradea. At that time it was Rumania. In 1938 the Hungarians occupied our town and it was called Nagyvarad. In June 1944 the Hungarians deported all the Jewish people to Auschwitz where I lost my parents, 2 sisters and 1 brother.

From Auschwitz I was taken to a labour camp and worked on pipe lines being laid. As the Russians were nearing to our camp, the Germans took us on the famous death march where thousands of people were slaughtered. Finally we arrived at a concentration camp called Flossenbürg from there we were again taken on a death march until the American army arrived and liberated us in a place called Neunburg in Bavaria.From there I came to England and landed in Southampton and we stayed in Wintershill Hall. After that I came to London in Golders Green Hostel together with Kurt Klappholtz and 30 other boys.

In 1955 I got married to Fay Hirshman from Belgium. In 1958 we moved to Antwerp and I entered the diamond trade. After learning the trade I became an expert in the rough diamond business. I retired at the age of 65.