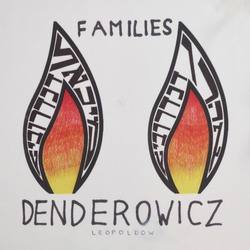 This square was made by the family of the late Dovid Denderowicz, a young boy from Leopoldow, Poland. He was separated from his family and suffered the war years in various labour and death camps, but miraculously survived and was brought to England where he married and settled in Gateshead. None of his parents or 12 siblings survived.