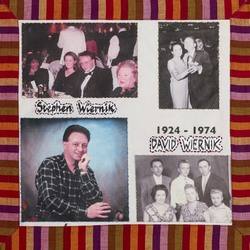 David was 15 and living in the town of Lodz in Poland when the war started. Hearing the Germans were rounding people up for deportation, he secreted his family in a high loft while he himself hid in a sewer. He saved seven people from certain death. Some of the relatives are still alive today.

David had many narrow escapes; at one point he was caught by Germans who put him on a horse and cart. He jumped off; they fired at him but missed and he got away. He survived work making bullets in a munitions factory at Buchenwald concentration camp where many of the workers turned yellow from the explosives.

David was liberated by the Russians and brought to Britain after the war by the Central British Fund. The CBF wanted to bring only children under the age of 16 but although my father was older, he had no papers and was painfully thin through starvation, so he was accepted as were many of the other Boys. He was sent to Windermere to recuperate and learn English. He was very lucky to be alive.