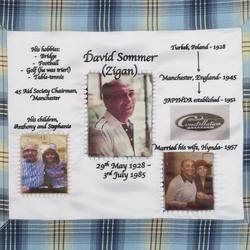 David was born in Tuerk, Poland in May 1928. He came from an orthodox family. He was taken along with his older brother Mendel to Auschwitz labour camp. He was liberated from Theresienstadt and was brought to England in 1945. His only surviving sibling was liberated to Italy for a short while and made his home in America.

He started a new life with two other survivors, Pinkus Kerned and Yankel (Jack) Aizenberg, as handbag and luggage manufacturers. David passed away at the age of 57 in 1985. His wife Hynda and children Stephanie and Anthony were his life, he gave us what he couldn’t have. He thanked Hashem every day for being one of the lucky ones who survived. It was a lottery, he told me.

The square represents David’s happier times: his business, his hobbies, his children. We still all miss him today.