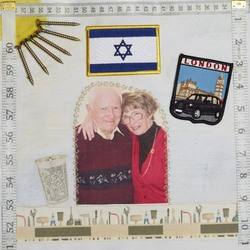 Our uncle, David Herszkowicz, was born on 9th of March 1928 in Jendrzejow, Poland. The whole family was together on Rosh Hashana, when news came that the Gestapo had arrived and was beginning to arrest families. David’s mother told him to run to a nearby forest to get help, which he did without questioning. He was picked up by the Germans and led back to his home which was empty. He later learned his family had been taken to Treblinka and gassed. David was ordered to clean up his home town, bury the dead, then clean up the sewers, all with his bare hands. After several camps, including Buchenwald, he was liberated from Theresienstadt, Czechoslovakia, and was brought to the U.K. with over 400 survivors, ‘The Boys’.

After rehabilitation, he went to a hostel in Golders Green where our grandmother, Chana Kamiel, was matron. She had come to London to be reunited with her son, our late father, Joe Kamiel, who had been on the Polish Kindertransport and was living in the hostel with The Boys. David met and married our lovely aunt Zena Nyman, and it was through David that our parents met: Zena’s sister Helen married Joe.

David was a man of many talents, some of which are depicted in his quilt square. He was a tailor, a shorthand clerk for the courts, and a taxi driver. It was always a treat to ride in his cab! David was incredibly adept at DIY: he built a kitchen and a bathroom, including cupboards, tiles, the works. We would love to make things in his garage workshop, even just hammering a nail into a piece of wood! David was a talented tailor and lovingly made a set of curtains for his nephew’s bedroom. When he and Zena retired to Netanya, Israel, he liked to keep busy and help people. He LOVED Israel and making aliyah was a dream come true. While in England he was a staunch defender of Israel and diligently learned excellent Hebrew. He adored the sunshine and would worship the sun’s rays whenever possible (hence the sun on the quilt), sunbathing on his deckchair at the seaside. Most importantly, he was married to Zena for 53 years: they were inseparable and truly devoted to each other.

David passed away on 21 August 2014 and will always be in our hearts.