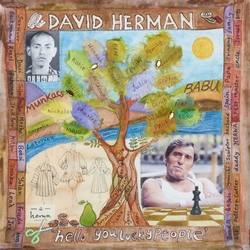 David was born on 6th September 1926 in Munkacs, Czechoslovakia. In April 1944 he was transported to Auschwitz, separated from his family, and then taken to Buchenwald where this black and white photograph was taken of him in prison uniform aged 17 – it is the earliest photograph we have. He survived slave labour in Gleina and Rhemsdorf and miraculously met up with his younger brother, Abe. They kept each other alive on the harrowing death march to Theresienstadt where they were liberated. More than 40 members of the extended Herman family were lost in the camps, but amazingly all three of David’s siblings survived.

From an orphanage, Belgická 25, in Prague, David came to Montford Hall in Lancashire in March 1946 with other Boys for rehabilitation, before moving to London to start again. In 1954 David married Olive, his inspiration and the love of his life, and they built a new family.

We all discussed what to include in the square and Julia brought our ideas to life. The Carpathian mountains and the Latorica river form the backdrop to an idyllic childhood. The pear and walnuts are from stories of David’s childhood – many revolved around climbing trees. The roots of the walnut tree are intertwined with the names of David’s grandparents, parents and three siblings. David and Olive’s names are inscribed on the trunk, their children and families’ names on the leaves, along with jewels. David said his four children were his jewels, his ten grandchildren were his diamonds.David’s grandfather owned a brick factory, represented by the brick border containing names of family members who perished and words representing David’s interests and things he loved – sculpture, chess, backgammon, swimming, sunshine, nuts, bagels, gnocchi, Israel, The Boys.
On the right, David is seated behind a chess board waiting for Abe to make his next move. On the left are sketches of his designs for Herwa Fashions, the company he built with Olive. David was incredibly artistic and a genius with scissors, cutting designs first out of paper which were then sketched.
Whenever he walked into a room, he always used to say: “Hello, you lucky people!”