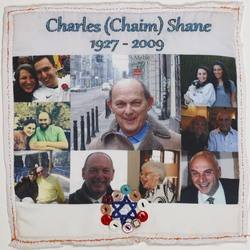 My husband, Charles Shane, Chaim Szlamberg, was born on 21st Dec 1927 in Lodz Poland. He came from a happy childhood until the war and together with his family he moved to the Warsaw ghetto. In 1940 he was sent to Kielce-Hasag, a hard labour camp. From there he went to Buchenwald and then to Theresienstadt where he was liberated in May 1945. He lost his parents, his three brothers and sisters and many aunts and uncles. He was alone.

He was brought to England in August 1945 and was looked after in Windermere for about 6 months and then he made a new life in London. He worked hard and became a button dyer. In 1948 he joined the Israeli army and fought for Israel. When he came back to England, someone he knew told him about a brother of his had survived the camps and was living in Israel.

I met Charlie in Manchester at the 45 Aid club in 1947 when I was 16. I thought he was wonderful because of his lovely nature. We courted for 2 years and then married on 24th December 1950. Slowly followed two beautiful sons, Michael and Elton, making a lovely family. Michael met and married Linda, Elton married Caron then Susan. Later four lovely grandchildren arrived, Daniel, Katie, Samantha and Georgia. Charles left us on October 29th 2009.