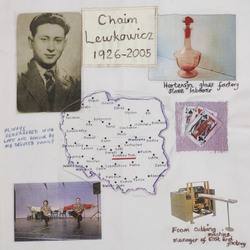 Born on 21st February 1926, the youngest of eleven children, to Yaakow and Chava, Charlie (then known as Chaim) grew up in Pietrkow Trybunalski, Poland. After surviving several concentration camps, he came to England as one of The Boys. He married Beca and had two children, Eve and Jack, and six grandchildren: Jonathan, Robert, Ilana, Sharon, Steven and Samantha.

Charlie managed a factory in the east end of London, manufacturing shoulder pads and was a member of Palmers Green & Southgate shul for many years. He and Beca loved to entertain their ‘survivor’ friends and spent many evenings playing cards – the women played Kaluki while the men played Poker!

A real life hero, at his shiva, three friends came forward and told stories of how he had saved them during the war. One friend told of how Charlie had carried him home from a day’s labour at the Ammunitions Factory – they would have shot him had he been unable to walk. Another told how Charlie had given him his portion of food when typhoid broke out in Theresienstadt at the end of the war. Camp staff were too afraid to come near with food. Chaim had saved some bread and gave it to him. Always a kind and generous man!