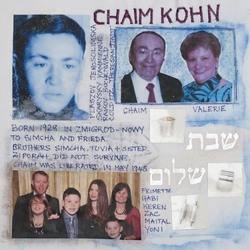 Chaim was born on 10th October 1928 in Zmigrod-Nowy near Krakow in Poland. His parents were Simcha and Frieda, he had two brothers, Zvi and Tuvia, and a sister, Zipporah Raisel.

Three weeks after the German invasion, Chaim was taken for forced labour doing road-building and stone breaking. In 1940 he was sent to Fristak labour camp with his brother Zvi. Two years later they were sent back to their families. However, shortly after nearly all the Jews, including Chaim’s parents, younger brother and sister, were taken to the woods and shot. Chaim and Zvi were taken to Plaszow concentration camp where they laid railway lines. When this closed, they were taken to Jerozolimska. They were then taken to Skarysky Kammienne where Chaim contracted T.B. and Zvi passed away from malnutrition and excessive work. In June 1944, the camp closed and Chaim hid for a day and a half under the boards in his barrack. He was taken to Rakov, then to Buchenwald where he worked in a quarry. After a short stay in Colditz making munitions, he forced to march to Theresienstadt.  He was liberated by the Russians on 8 May 1945. After three months he was flown with the other “Boys” courtesy of the CBF from Prague to Carlisle, then to Windermere to start his recuperation. After some time in sanitoria, he went to the Finchley Road Hostel and started at the ORT school studying engineering. He realised it would be impossible to keep his religion if he continued, so went to work firstly making Snowcrest Ice Cream, then going into partnership with fellow survivor Abe Richman, with whom he worked for 50 years, firstly in rags and then in commodities.

Chaim enjoyed his time at the Primrose Club, especially the dancing, table-tennis and football. We met in 1962 and married in December 1964. Our daughter Frimette was born in October 1967. She moved to Israel, married Gabi Abrahams and had two children, Keren and Zac. They later returned to England and had two more children, Maital and Yonni.

Unfortunately, Chaim’s experiences and earlier ill-health caught up with him and he passed away on 5th July 2003. His greatest pleasure was seeing his grand-children and knowing that his family would live on in them.