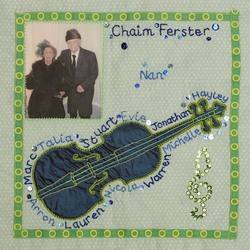 Dad was born on July 18th 1922 in Sosnowiec, Poland. He was the only son; he had 3 sisters, 2 of whom were married with children. His younger sister Manya and Dad are the only survivors of a large extended family.From March 1943, he went through 7 concentration camps, where he experienced hell on earth. In Graditz he contracted typhus and by some miracle survived. In September 1944 he arrived in Auschwitz, which was a terrifying experience. After 6 weeks, they were selecting engineers. He immediately volunteered and after various tests, he was fortunate enough to be selected along with a few hundred others. They were loaded onto cattle trucks and after a horrendous journey on which many people died, they arrived at Niederorschel in Germany. This camp was comparatively like a holiday camp. He worked in a factory assembling the wings for Junker planes. At the beginning of April 1945, they closed the camp and all the inmates were ordered onto a Death March. Many people died and on the evening of the 10th April 1945 they arrived at Buchenwald. During roll call on the 11th April, American planes flew overhead, the German guards scattered and American tanks entered the camp shouting, “You are free, you are free!”

Some weeks later Manya, who was liberated from Belsen found our Dad and they were re-united. Thanks to their uncle, Bernard Forster, who had moved to England prior to the 1st World War, they arrived in the UK on February 7th 1946 to start a new life. In 1947 he met Nan at the Ritz ballroom in Manchester and in 1948 they married. Our parents were married for 65 happy years and had 3 sons, 6 grandchildren and 2 great granddaughters. Sadly, our dear mother passed away in January 2014. Family has and always will be our Father’s number 1 priority. Four months ago, dad retired from full time employment and to keep himself occupied, speaks to schools all over the country, educating children about the horrors of the holocaust. He has also taken up his love of playing the violin.
The square represents 65 wonderful years of married life with his soul mate Nan, his dear family which is so important to him and his new found love of playing the violin.

This project is particularly important to dad, as his greatest fear is that the holocaust will be forgotten in a few generations. Projects like this help keep the memory alive.