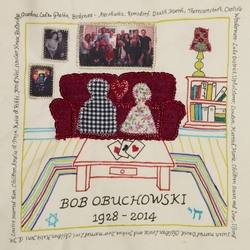 My dad, Bob Obuchowski, was born in Ozorkow, Poland in 1928. He survived the Holocaust, living through the horrors of the Lodz ghetto, concentration camps, which included Auschwitz, Buchenwald, Rhemsdorf and Theresienstadt. He was liberated in 1945 and arrived in Carlisle, Cumbria, with the first transport of children who were to make a new life in England. They stayed in a hostel in Windermere. In his words, he went “from hell to paradise”.The centrepiece of our square is two figures representing Bob and his beloved, petite wife, Marie, seated on a sofa. This is the type of furniture Bob specialised in making as a master upholsterer.
Bob was an effervescent character. He said his biggest achievement in life was his family, pictured above them. On the bookshelf is a Siddur. Bob never lost his faith in Judaism and loved going to Shul.
The playing cards represent the fun he had playing Kalooki and teaching the game to a variety of people.
Around the square are words describing important events, places and people that form part of his story. With his infectious smile, Bob left a lasting impression on everyone he met, the true mark of a wonderful and inspirational man.