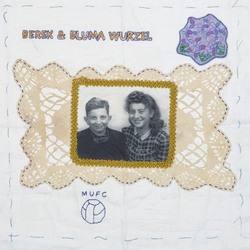 Our mother Bluma Wurzel Urbas was born on May 2, 1926 in Radomsko, Poland. Her father was a wealthy businessman in Radomsko and had many diamonds that he hid away carefully. He used the precious stones to pay various country people to hide his family in big dog houses on their farms. Eventually, her father purchased his wife’s and 3 children’s way into an ammunition factory work camp, where they remained until their liberation. After the war, Bluma and her younger brother Berek were brought to the Lake District in England with other refugee boys and girls. There, they were taught the skill of sewing from a tailor in Manchester.
Berek met his wife Carole Stahl and settled in Manchester, England, as an entrepreneur in the pocketbook business. Bluma joined her sister, Bronya, in a relocation camp in Munich, Germany, where she met her husband Bolak (Benjamin) Urbas, and gave birth to their first daughter, Gail. Soon after, they immigrated to the US and settled in Boston, Massachusetts where Bluma gave birth to their second daughter, Pamela. Today, Bluma has seven grandchildren thriving across the US in New York, California, Massachusetts, Ohio and Pennsylvania.The picture we selected for the quilt was our mother’s favourite with uncle Berek and her long hair. Their love and admiration for each other was intensely mutual. She always talked about how her little brother cried when she cut her hair. We never knew her with long hair.