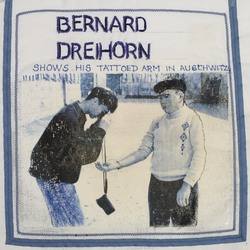 Berek (Bernard) was born in Poland and passed away in Middlesex in February 1994. During WW2, he spent time incarcerated in the Lodz ghetto and came to England after the war, enabled by the fact that he had an aunt who was already living here.

He received his naturalisation papers in 1955, and was known as Bernard. Initially living in Manchester, he then moved down to London, where he stayed in accommodation in Finsbury Park together with a group of around nine ‘Boys,’ including Harry Spiro and Jack Kagan. During this period, he set up a handbag manufacturing business. He married Ruby, although they did not have any children. After Bernard’s death, Ruby married another survivor, Moric Friedman.

Bernard, like many survivors, accompanied groups back to Poland, and the Memory Quilt depicts a poignant moment when a young man was in conversation with him while they were walking in Auschwitz.He asked to see the tattoo and Bernard rolled up his sleeve so that this young man could take a photograph of the number on his arm. This was such an intense moment, captured in the very death camp where the number had first been seared into his skin. Bernard passed away the year following this emotional trip to native homeland.